Tell me if you’re familiar with this scenario: A publisher announces a game, and you really like what you’re seeing and hearing from the developers, so you vow to put it on your immediate play list.

Four years pass and you still haven’t touched it.

Unfortunately for me (or Ubisoft), I relegated Rainbow Six: Siege to the near-infinite void of the “play pile,” in 2015. Despite its name, few game discs escape this stack and their packaging to slip into a console and get played. This stack of games is a vertical imprisonment of fun, with its invisible walls and bars constructed by modern adulthood’s robbery of both free time and disposable income.

Rainbow Six Siege eventually escaped its fate when Ubisoft’s Rainbow Six: Siege invitational hit my radar: a week long e-sports hoopla pitting the best of the best at the game against each other. The PR email mentioning the event prompted me to remember that, “Oh, hey. Yeah! I once really wanted to play that game.”

So, before we talk about the new operators, let’s give me and the rest of us a bit of a refresher on Rainbow Six: Siege. 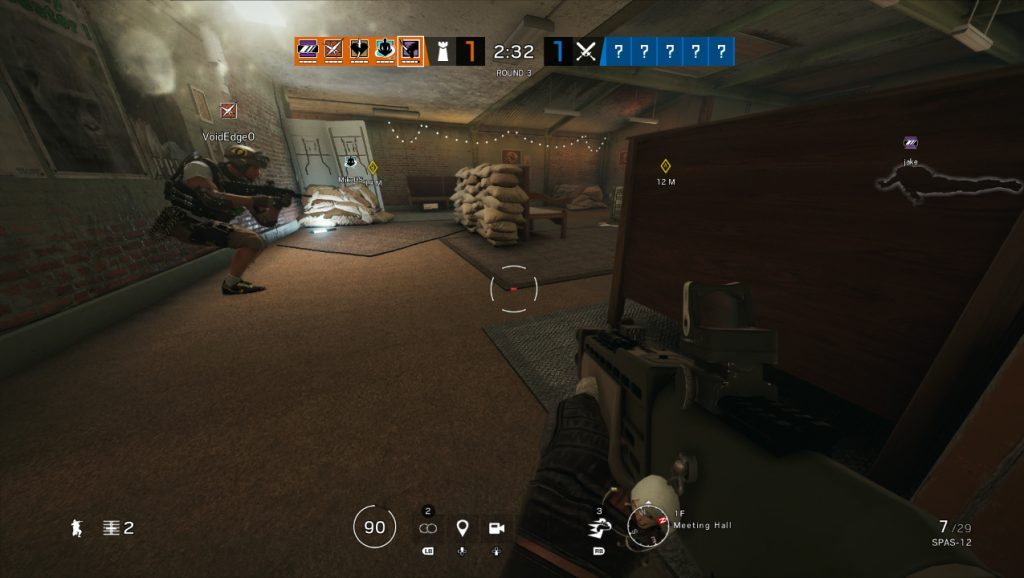 Above: We’re going to protect these bombs until they blow up. Wait. What are we doing?!?

Let’s get caught up on Rainbow Six: Siege

And play Rainbow Six: Siege I did! What I discovered was a fun tactical first-person shooter, with the obligatory and unabashedly Counter-Strike-influenced structure: a team of Offensive Operatives try to dispatch a team of Defensive Operatives, who are usually protecting one of two bomb sites.

Unlike Counter Strike and some other popular first-person shooters like Call of Duty or Apex Legends, Rainbow Six: Siege’s action is significantly less bonkers. Movement is toned down and reserved. Running just makes you a large, clumsy, and loud target. This is something you must avoid being in Rainbow Six Siege, because death is oh-so-harsh and gawd-damned-quick.

The vast majority of winning a fight in most first-person shooters comes down to who sees who first, and in something like Rainbow Six: Siege it becomes skewed even higher. Guns rarely require more than two or three quick bursts to kill an opposing player, and healing is an almost adorably naive idea, unless a teammate runs one of the very few healer characters in the roster. Above: Iana … seriously. The camera is in this direction.

The character roster is another distinct element to Rainbow Six Siege. For one, it’s large compared to other titles in the genre, closer resembling a fighting game.

With that large cast comes a stricter loadout. Every character has the choice of two primary weapons, maybe two types of explosives, and that’s it. The customization is thin, which is fine, because Ubisoft has obviously tuned these characters to specific playstyles.

Each character also comes with one special ability, which includes things like the aforementioned healing, special equipment that may hack certain electronic components, special weapons that have specific uses, or items that destroy enemy barriers and walls.

Barriers and obstacles are the other hallmark of Rainbow Six: Siege, and it’s one of the elements that peaked my interest at the game’s announcement. Play isn’t relegated to a static rat’s maze of invincible walls and ceilings. Drywall in Rainbow Six: Siege isn’t cosmetic, but a powdery block of material that can be easily punched through to create new lines of sight. Wooden floors beg to be abused and turned into vertical peep holes, enabling bullets to rain down on the enemy below.

Breaching a bomb site doesn’t necessarily require going through a door frame that meets city code regulations. Sometimes you have to create a new door by eradicating a wall, bad Feng Shui be damned. Above: Let’s just board this up …

Great, you played the game. Good for you. But what’s new?

When the Rainbow Six: Siege Invitational PR hit my inbox, it also included a chance to go to Ubisoft and get some hands-on time with the two new characters being introduced to the game (a part of the Operation Void Edge campaign): Oryx and Iana.

At first glance folks may get the impression that Oryx is simply a defensive version of Sledge: an offensive operative that uses a tactical sledgehammer (surprise!). Both Oryx’s and Sledge’s special abilities have similarities: Both are designed to breach walls, hatches, and barricades quickly. But there are some significant key differences.

An obvious difference is that Oryx’s breaching ability, known as the Remah Dash, is much less subtle than Sledge’s hammer. The Remah Dash propels Oryx’s body forward, enabling him to violently burst through walls like the Juggernaut. In the right situation, Oryx is able to suddenly blow through a wall violently, like a cheap Halloween haunted house jump scare, and catch offensive operatives by surprise while creating chaos.

Although this seems to be the primary use for the Remah Dash, there were some immediately apparent drawbacks to that tactic. Smashing through obstacles drains Oryx’s health by about 10 points. On paper that doesn’t sound too bad, but as mentioned before, Rainbow Six: Siege is a highly lethal shooter, where health recovery is sparse, and conflicts end in seconds. Maybe there’s an argument to be made that the highly fatal nature of the game makes the 10 health point loss trivial? Even if that’s the case, the health cost for Hulk smashing hard surfaces is still something to keep in mind.